You are here: Home1 / org charts 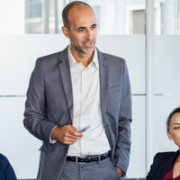 “”Every company has two organizational structures: The formal one is written on the charts; the other is the everyday relationship of the men and women in the organization.”  – Harold Geneen

Among all the things I have learned working with schools over the past fifteen years, perhaps the most important lesson is that each school community is a distinct organism with a culture, traditions, and character all its own. This does not mean that best practices from a particular school cannot be leveraged or applied at another, but it does mean that we need to be sensitive to the site context and culture when making recommendations. This is especially true if the best practices we are considering require change on the part of current employees and/or the functional division of labor and organizational structures in which they sit.

One of the areas where I think schools have the most to learn from other organizations is in their talent management practices. And one of the core talent management practices that many growing school organizations ignore at their peril is the imperative to create a clear and appropriate organizational design, reporting structure, and job responsibilities along with a transparent salary schedule that is evidence-based and reflective of broader market trends.

About 18 months ago I was brought in by a small but growing charter school organization to help them evaluate the effectiveness and appropriateness of their non-teaching staff roles, responsibilities, and reporting structure. The principal and many of the staff had started there when it was a brand new, stand-alone school six years before. Based on parent demand and its academic success, the school decided to expand the grade levels they served, creating an elementary and middle school program.

In planning for this change, school leaders had spent time developing and implementing a model for the increased educator capacity they would need including demand for new classroom teachers, specialists, and other instructional staff. They had modeled the facilities needs that would result from an increase in enrollment and ensured that their student enrollment and thus budget revenues would cover these updates. Finally, they hired one new school leader and promoted others so they would have adequate instructional leadership for their expanded grade levels. In short, they did all the things that most schools in their situation would do in preparing for an expansion or replication of an existing academic program.

The one thing they didn’t plan for, though, was the need to update their projections and expectations for leaders and staff who did not sit squarely on the academic side of the house. They still had one single office where all non-teaching staff worked, with an open reception area and a few offices along the perimeter for more senior staff. The Director of HR, Data Analyst, and other admin team members would regularly get pulled into conversations with parents around school routines or student health and discipline matters even though there were dedicated receptionist/assistant staff that should have been managing those types of issues and inquiries.

In addition to the lack of physical separation between what we would typically consider “central office” staff and those dedicated to school site activities, there was a lack of clarity regarding who reported to whom and who was in charge of which functions. All of the clerical/admin staff felt overworked, in large part because they each felt they were supposed to be involved in everything but did not understand who had ultimate accountability for most core activities. Small matters like preparing flyers and ordering food for events took on outsized importance as the office lacked clear systems for ownership of even low level tasks. And finally, job descriptions were nonexistent or out of date while salaries were inconsistent – some employees seemed to be paid outside the market range (either too low or too high) without a clear rationale.

This school approached our firm to help them sort out these challenges and come to resolution on these key questions:

Before jumping to recommendations, we started by first examining what staff members were currently doing in their jobs in the hopes of then being able to pinpoint areas of inefficiency or where too few resources were being allocated to ensure staff success. We asked the school’s HR lead to require employees to track their time over a one month period, i.e. listing the tasks they worked on, category of work those tasks fell under (i.e. admin work, data analysis, parent communication, etc.) and duration of each activity. In addition, we scheduled one-on-one interviews with every admin team member, from receptionists to directors and senior school leaders. With each, we discussed what they saw as their core responsibilities, what challenges they faced in completing those tasks, and what they liked best and felt most confident in within their current duties.

Once we had a sense of the current state of the organization, we then turned our attention to best practices research to design the ideal for: how responsibilities should break down in terms of teams and individuals; how to ensure functional areas are covered in an efficient way; and a reporting structure that maximized current staff talents and future needs. We gathered sample org charts from a dozen similar sized charter school organizations as well as interviewed several talent leads and administrators at those schools to find out their answers to some of the questions above.

Both of these steps – diagnosing the current state and looking at how others have solved similar problems – led us and the school leadership team to realize they needed a much clearer line between staff who were primarily responsible to a specific school site and those whose purview was broader, requiring them to be more separate from the school both physically and in terms of job accountability. The leadership team decided to put up physical barriers between the school reception desk and the office space dedicated to admin who worked on HR, accounting, and data so they could have a quiet space and sustained, uninterrupted time to work.

We also realized that having a corps of admin generalists did not serve anyone’s interests well, and thus managers needed to be much more specific about what each person needed to manage and to whom they reported. This meant that some folks had to give up responsibility for things they were used to being a part of while others had to change who they reported to and thus adjust to a new manager. At the same time, it also meant each job was more specific and narrowly tailored to a common set of responsibilities, and targeted a similar range of competencies that better match skills and abilities that tend to go together (i.e. external facing interactions with community members vs. detail oriented, paper-based tasks).

With a new org chart, coherent job descriptions, and evidence-based salary schedules in hand, senior leaders decided to open up these positions to the public for the first time in years. Managers met individually with staff who could be affected to talk through the reorganization plans and share new job titles and responsibilities. Current staff were invited to apply for any of the roles and were given priority for interviewing. In the end, most people were able to stay, either in a very similar role or by shifting to a new, more defined job title and set of responsibilities. One person did end up leaving because there was not a role that fit her expectations. (In this case, the organization honored her service by giving her time to search for a new job and providing her with positive references.)

When we checked in one year later, school leaders were feeling much better about how the office runs. They appreciated the benefits of tightening up on accountability and reporting structures, and observed a large boost in employee morale as a result of improved role definition and focus.

In this project, we were reminded that although it can be tough to tackle reorganization head-on, not acting and just hoping things will work out can be a much worse outcome for everyone involved. By starting with gathering and analyzing data about the current state of affairs, collecting artifacts and examples around best practices, and then using both of those – as well as your own intuition and understanding of your organizational culture – to craft a new org design (including roles, responsibilities, and clarity around lines of accountability), you can dramatically improve office efficiency and morale, thus better serving your instructional team and – most importantly – your students, in the process.

Christina L Greenberg is Co-Founder and Partner of Edgility Consulting, a leading executive search and talent management firm serving schools and nonprofits in the education space. Her practice has a particular focus on the talent needs of small- to mid-sized charter school organizations. Christina is originally from the Bay Area, lived in LA for almost a decade, and for the last 14 years has lived with her family in Oakland, CA. She is a long-time board member of Lighthouse Community Public Schools, a charter network with two schools serving grades K-12 in East Oakland.